Cholada: The Story Behind a Malibu Favorite

Originally Printed in Malibu Magazine May 2018 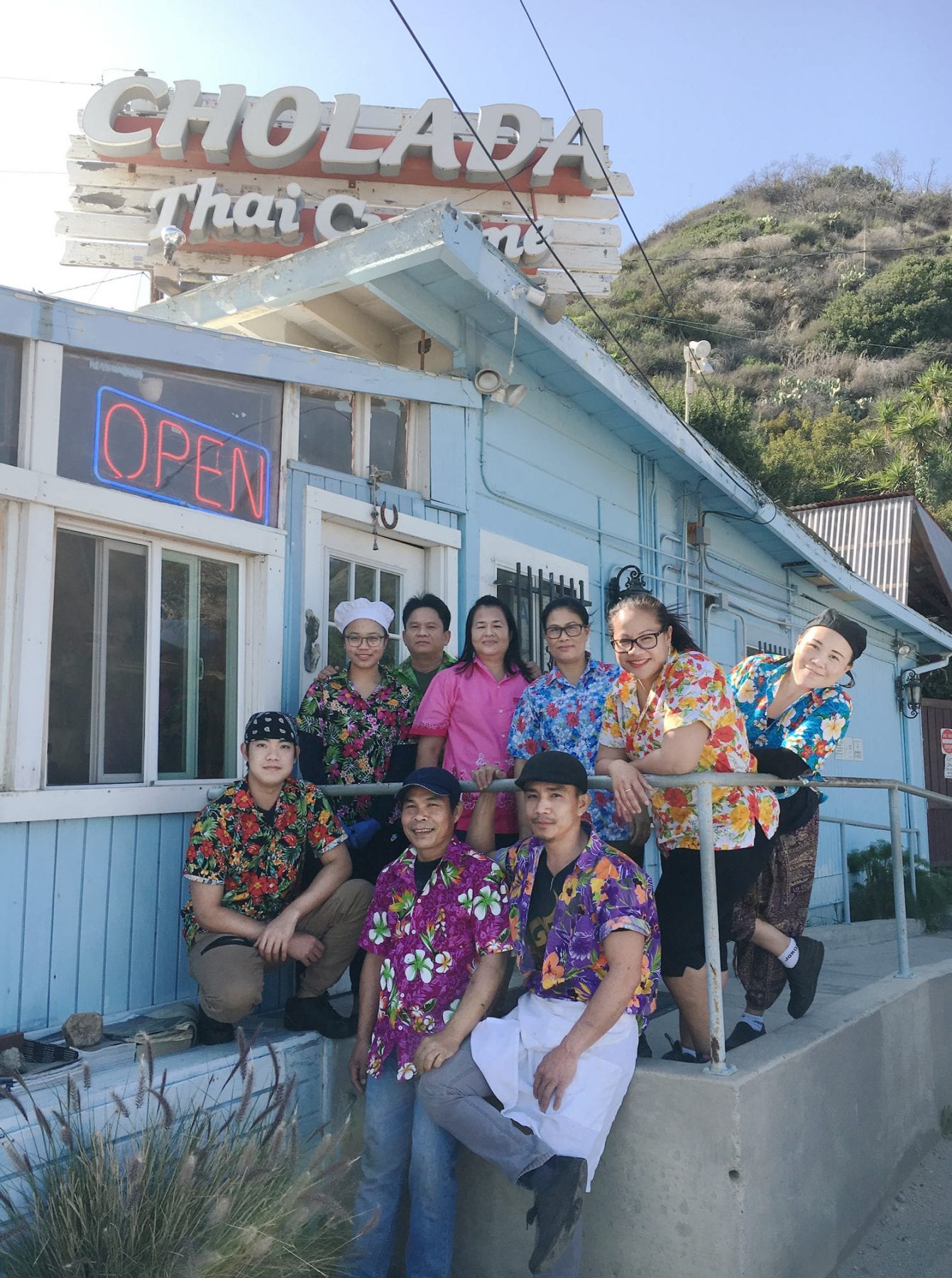 The married owners of Cholada Thai Beach Cuisine came to America with nothing — except the dream of someday running their own restaurant.

“In our country, we have big families and you have to help your mom cook,” owner Sawai Theprian said through a translator. “You’re never too young to help because everyone in the family has to help,”

Theprian is the seventh sibling of nine. “As kids, my husband and I cooked with our moms and that’s where our passion for cooking started,” she said.

In Thailand Theprian eventually came to own her own food kiosk, but always dreamt of more. In 1995 she immigrated, and soon landed a job at Thai restaurant Noodle World in Southern California. She soon developed a connection with the only other chef at the restaurant, fellow Thai expat Nikorn Sriwichailumpan, who had immigrated in 1993, with the two soon becoming a couple, and eventually marrying.

After a few years at Noodle World, the couple heard of an opportunity to own their own restaurant in Boston and soon made a cross-country road trip. “When we got there, we found out there were  no chances of owning a restaurant,” she said. “Also, Boston was too cold.”

In 1998, the couple hit the road again and traveled to Florida. Theprian said she knew people there who told her they would sell a restaurant to her with a contract. “When we got there, they didn’t do anything,” she said. The couple realized the deal unfortunately went sour. “We lost $10,000 and the owner kept the  restaurant,” she said. “Also, Florida was too humid and too hot.”

Frustrated, the couple headed back to California once again, but soon happened upon an advertisement for job openings at a restaurant in Malibu. “Twenty years ago, before I came to America, I didn’t even know where Malibu was,” she said.

The two became the chefs of Cholada Thai Beach Cuisine in 1999. “The previous owner gave us the opportunity to work,” she said. “We were the chefs for a year.” When the owner ultimately decided to sell Cholada, he approached the couple.

“Because we worked so hard, he let us own the restaurant,” she said.

Despite their earlier trials, the couple achieved their dream and have owned Cholada since 2000.

“I’m very proud when someone asks me where I own my restaurant and I say Malibu,” she said. “They always go, ‘Wow!’”

Her husband still cooks in the kitchen every day, while Theprian serves the food. “If my husband is not very, very sick, he’s going to be here every day,” she said. “He wants to make sure everything is perfect for the customer. We always put the customer first.”

Cooking for their customers sometimes reminds them of their childhood in Thailand, when they cooked for their big families and fell in love with making food.

“When the people love our food, that is the best reward,” Theprian said. “When customers say, ‘Hey chef! Thank you, good food!’ it touches my heart every time.”

The previous owner will still occasionally stop by to see them and enjoy a meal. “He’s like, ‘Wow’ because we’ve been able to grow the business,” she said.

All of their effort goes into preparing the food and running the establishment. Theprian even created all of the recipes on the menu herself. “I had to adjust to the taste for Americans though because they can’t take the spiciness,” she said with a laugh.

Customers can still get their fix of spice with menu items such as the Spicy Glass Noodle Salad, served with shrimp, ground chicken, glass noodle onion and vegetables in a lime chili dressing, Spicy Seafood Bonanza, a spicy blend of squid, mussel, crab, fish and shrimp mixed with broccoli and fresh basil, and the Prik King, a Thai dry red curry with green bean and ground peanut. All of the ingredients are bought from local Asian markets near the couple’s home in Hollywood. The freshness can be tasted in Cholada’s traditional favorites such as Buddha’s Feast, served with fresh veggies stir-fried in an exotic brown sauce, Gaiyang (Thai Barbeque Chicken), which is a marinated half chicken served in Cholada’s homemade sweet sauce, and Pad Thai, made with rice noodle, egg and bean sprout.

Of the extensive menu, Theprian said her favorite items are the curries. Cholada offers a selection of colorful curries such as Green Curry, made with coconut milk, fresh eggplant, basil  and bell pepper, Yellow Curry, rich with potato, carrot and onion in coconut milk, and Panang Curry, a smooth red curry with coconut milk, pea carrot and zucchini. Each dish serves as a reminder of home.

“My husband hasn’t been back [to Thailand] in almost 10 years,” Theprian said. California and Cholada are their new home. Their two daughters, 27 and 28, help their parents in the restaurant while their niece recently came to America with the family’s help.

With all it takes to run a restaurant, Theprian said she is also going to school to improve her English because in Thailand, she couldn’t speak the language at all.

“I never stop learning,” Theprian said. “I understand more than I thought.”

This shouldn’t come as much of a surprise though, considering Theprian and Sriwichailumpan understand how to achieve their dreams. MM